A Lexcel Assessment Trip Of A Lifetime

Centre For Assessment have done many assessments for clients over the years, but few have been quite like assessor Damon Swindell’s assignment to the Public Solicitor’s Offices on Saint Helena and Ascension Island in the middle of the South Atlantic sea.

Ascension Island has only around 800 residents and is found 2,500 miles east of Rio and 1,210 miles west of Namibia, one of a cluster of remote islands that are part of the British Overseas Territory. Not your average location for an assessment.

The first task for anyone sent to do a Lexcel assessment there (after consulting a map) is to work out how to get there. There is an airport on Saint Helena (which is where Napoleon was exiled and died), but unfortunately no plane has been found that can safely land there because of the cross winds, so the only way to get to the islands is by sea.

It took a seven day voyage aboard the RMS St Helena (one of the last working Royal Mail ships in the world) out of Cape Town to travel to the islands, along with the regular cargo of sheep, goats, furniture, food, mail and machinery. But an assessor’s got to do what an assessor’s got to do, so we packed Damon off on his travels.

Delays to the sea voyage meant arriving at Saint Helena on a Sunday, when everything on the island (inhabitants: around 4,000) was closed, but the assessment got underway the next day. The Public Solicitor’s Offices on Saint Helena and Ascension Island were set up by the government because the islands were too small to sustain private legal practices. 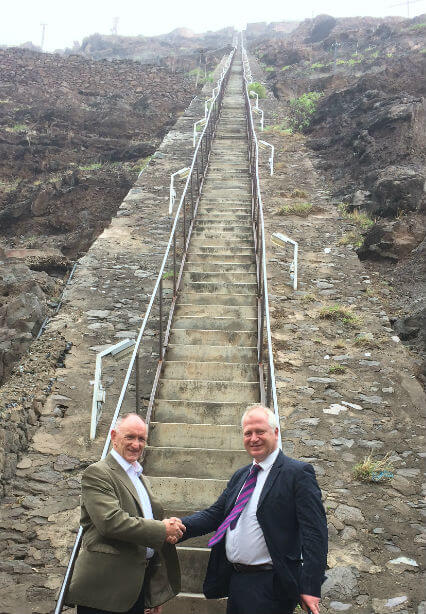 They are largely run on a not-for-profit basis, with most legal advice given free at the point of delivery and only a few services charged for.

Authorisation and regulation is by the SRA and the policies and procedures adopted were assessed against Lexcel 5 International, and the assessment of the St Helena office saw only a few corrective actions required.

The main challenge in the assessment was climbing the stairs to the Public Solicitor’s Office in Saint Helena, which is based in an old fort at the top of Ladder Hill.

The staircase is known as Jacob’s Ladder because of the sheer incline and 699 steps required to climb it. Fortunately, there’s also a longer and more gradual route to the top.

Another 3 day voyage was needed to get to Ascension Island from Saint Helena to complete the assessment of the office there, though the decision has now been taken to close that office and service clients on the island remotely.

Once the assessment was completed, it was time for Damon to return home, which was another adventure as he was flown home by the RAF on an A330 Voyager, reflecting on his assessment trip of a lifetime:  “The highlight of the visit was seeing the giant green turtles,” he said.

“They come onto shore each night to lay their eggs and return to the sea the following morning.  A truly memorable once-in-a-lifetime experience.

"Being a Lexcel Assessor has its perks! Two weeks travelling for two days of work but the trip of a lifetime with many cherished memories.

“I’m now looking forward to the AMV1 by which time, the airport of St Helena should be operational.  A whole new experience awaits!”

Why not get in touch? we are always happy to answer any questions you might have.